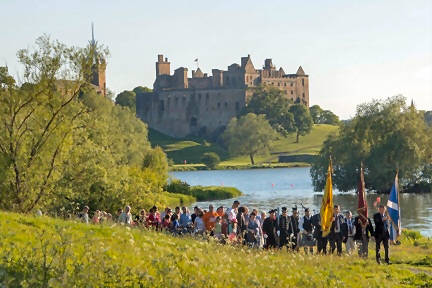 This year's Perambuation will start at 7pm from St Ninian's Criagmaillen Church on Wednesday 7 June.  The walk is 4 miles (6.5 km) long, and passes by seven out of eight march stones (one original and seven replicas) marking the old parliamentary boundary. The leaflet gives full details.

The Perambulation of Linlithgow's 1832 Parliamentary Boundary successfully took place on Wednesday 8th June, 2022. The Perambulation was headed up by the Provost of the Deacons' Court, supported by flagbearers, halberdiers and the town piper, who played at each of the march stones. The walk began outside St Ninian Craigmaillen Church and proceeded along the south shore of Linlithgow Loch, past Linlithgow Palace and the Peel, then passing St Michael's RC Church, West Lothian County Cricket Ground to join the Union Canal and then along the canal towpath to Manse Road.

At the short refreshment stop at Linlithgow Canal Centre the walkers were entertained by the Linlithgow Reed Band.

The walkers then proceeded up Manse Road, passing the site of the Carmelite Friary and one of the original boundary marker stones to greet the Linlithgow and Linlithgow Bridge Childrens' Gala Day queen elect in Rosemount Park, moving on to Preston Road and returning to the West Port, where those who completed the course received a well-deserved certificate.