Site of the Carmelite Friary 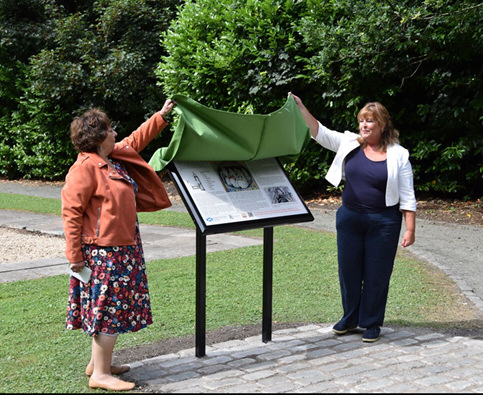 Improvements to the site of the former Carmelite Friary, managed by Linlithgow Civic Trust; funded by the Town Centres Improvement Fund, Linlithgow and Linlithgow Bridge Town Management Group and Linlithgow Burgh Trust and landscaped by Fernbrooke - with voluntary support from Linlithgow Grange Rotary, have been completed and MSP Fiona Hyslop unveiled the interpretation panel on 28th August 2021.

Constructed in 1290 the Carmelite Friary outside Linlithgow's town boundary was used until the reformation in 1559.  The stone was removed and used elsewhere and little remains apart from the foundations.   The site has been excavated in 1905, 1953 and most recently in 1983/84. 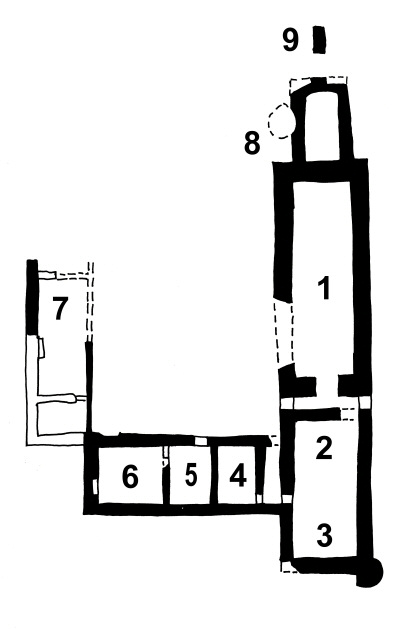 Layout plan of the Friary

The extent of the friary is marked out in paving slabs.

The friary was one of twelve Carmelite establishments in Scotland and, in common with most others, dedicated to the Virgin Mary. The term Carmelite comes from the place of the friars’ origin, Mount Carmel, in what today is Israel. Another friary was located in South Queensferry the remains of which were incorporated into the Priory Church of St Mary of Mount Carmel.

It has been claimed that the Linlithgow friary was founded in the late 13th century but there is no evidence to back up this claim. A surviving early 15th century document describes the giving by Mary of Guelders, the wife of King James II of Scotland, of “a grant to the Order of the Brothers of the Blessed Virgin Mary of Mount Carmel of eight shillings.”

The White Friars, were well liked by inhabitants of Linlithgow who called them “the brethren aboune the toune,” located as they were on rising ground, outside the royal burgh of Linlithgow. Dedicated to helping others they were a Christian mendicant order that adopted a lifestyle of poverty and ministry, especially to the poor.

The friars were highly literate and assisted in the settlement of legal disputes. Prior Hopper, the last head of the establishment, for example, witnessed a sasine, or registration document, transferring property to Alexander Livingston who was the guardian of Mary Queen of Scots. His work in the community, was rewarded by becoming a burgess of the burgh. The central image of the panel depicts a group of Carmelite friars taken from the marginal roundel in the Book of Hours circa 1470, reproduced here by kind permission of the Bibliothèque Nationale de France.

By the mid-16th century, the friary was recorded as being “a church, a burial ground, several houses and other buildings, greens (areas of grassland), orchards and crofts,” located in extensive lands which stretched from what is now Riccarton Road in the south; to Kettlestoun in the west, from what is now Clarendon, off Manse Road in the east; and to the boundary of the high street riggs to the north, approximately where the railway line runs today.

A teind, or tithe barn, located on what is now Strawberry Bank was where the friars stored tithed contributions of grain and other produce.

It appears that the friary, unlike St Michael’s Parish Church, survived relatively unscathed from the visit of the Lords of the Congregation in 1559. After the Reformation and the disbanding of the Order, the monastic lands were sold off or leased by the town. In 1624, Alexander, 2nd Earl of Linlithgow, obtained the rights to the friary, the stones of which he sold off for various building purposes.

Remains uncovered in the archaeological excavations were generally in a poor condition. Only at one point was there anything more than building foundations. It was established that an earlier chapel had been incorporated into the friary. Finds discovered included Neolithic pottery, bones, as well as fragments of lead and stained glass. A graveyard existed next to the friary and an analysis of the bones showed that 58% of those buried were under 18 years – in all likelihood members of the local community. 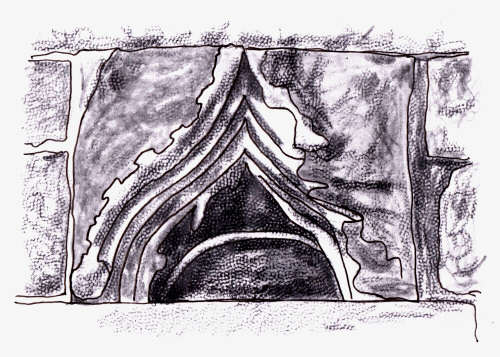 Surrounding street names such as Friars Way, Friars Brae, Friars Loan and Priory Road preserve the sense of history. The site, today owned and managed by West Lothian Council, forms an attractive link to Rosemount Park and is open all the year. It is on the route of the annual Perambulation of the Marches, organised by Linlithgow Civic Trust.

The illustration depicts an aumbry, a small recess from the wall of the church, located in a nearby house.

There is more detailed information in Canmore.