Burgh Beautiful’s Competitions Working Group were very busy in the first 8 months of the year preparing for this year’s Beautiful Scotland competition in August. The last time we competed in a similar competition was in 2018 when we were invited to represent Scotland in the Britain in Bloom UK finals, in which we were delighted to win the ‘Town’ category.

Preparations for this were very challenging because, at that time, all the town’s roads and pavements looked particularly neglected, entailing a massive amount of voluntary work from Burgh Beautiful volunteers and other town residents to upgrade Linlithgow’s public realm to a standard worthy of our floral displays and environmental projects. We decided to take a break from Beautiful Scotland in 2019, and of course the restrictions and uncertainty associated with the coronavirus pandemic necessitated cancellation of the competition in 2020 and postponement until this year. 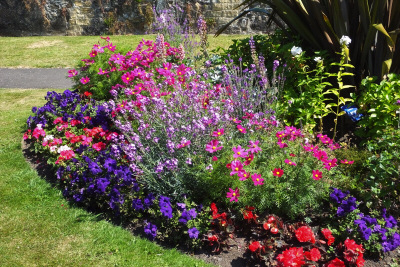 John Mason of the Competitions Working Group produced a comprehensive report in January, listing the improvements required on the judges’ route and categorising them under the heading of the organisations which would be involved. As always, much of this related to the removal of weeds and detritus from the streets. Help came not only from Burgh Beautiful members but from the wider community, all of it much appreciated, and Council staff helped where they could.

We welcomed judges Adrian Miles and Alison Anderson to Linlithgow on 10 August. The judging began at our Clarendon base, followed by a walking tour of the town lasting two hours and 45 minutes, aiming to show off Linlithgow to its best advantage and emphasising the three main judging criteria relating to floral displays, environmental responsibility, and community involvement.

Because of the need to avoid transporting the judges in a car (to avoid the risk of virus transmission), the entire route this year was on foot, in and around the centre of town. Recent projects on the revised judges’ route included the upgrading by Linlithgow Civic Trust of Carmelite Friary site and the footpath through to Rosemount Park, with the much-valued help of the Rotary Club of Linlithgow Grange, and Burgh Beautiful volunteers extensive work to successfully re-plant the flower/shrub beds at the Low Port roundabout, which had been much in need of a ‘makeover’.

A big worry had been the condition of our two major High Street gap sites; thanks to Council and public pressure, both landowners have taken some action to improve matters – the Templars Court site had been tidied up, although this has since deteriorated again, and a hoarding has been erected along the front of the Victoria Hall site. 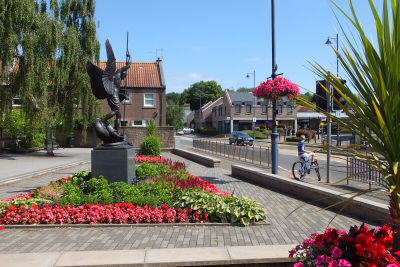 Our revised route this year ended at the Cross, following a walk down the Kirkgate from the Peel. Historic Environment Scotland had been alerted to tidy up relevant areas, but promised wildflower areas are postponed until 2022 because of the pandemic. After the tour, we had to wait until Thursday, 23 September to hear the results. Unfortunately, the razzmatazz of the awards ceremony last experienced with Britain in Bloom at Belfast in October 2018 was replaced by an event on Zoom, attended officially by Burgh Beautiful member and LBT Trustee Melanie Oxbrow!

We were delighted to achieve ‘Gold’ in the ‘Medium Town’ category, the highest level of award available to us. We were also pleased to win for Linlithgow the ‘Visit Scotland Award for Tourism’ which recognises best practice in the promotion of tourism – in our case taking account of such projects as our ‘Floral Trails’ booklet and our civic heritage sculptures of the ‘Black Bitch’ and St Michael, not to mention Dudley of course! We also received a Community Horticulture Award, recognising in particular the superb quality of Audrey Simpson’s community garden at the West Port flats, described by the judges as ‘faultless’. 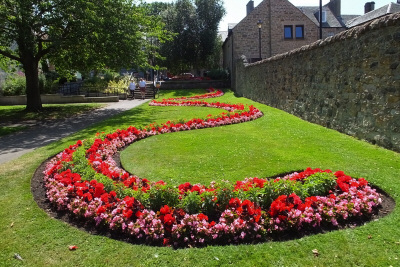 Here are some of the other comments made by the judges in their report:

“Linlithgow has bucket loads of heritage, which Burgh Beautiful are fully engaged with (and which) provides a fantastic backdrop for jaw dropping floral displays."

"It is obvious that the community fully support the work of Burgh Beautiful, with a regimented army of volunteers ready and willing to plant and care for the copious planters, beds and hanging baskets. The logistical challenge of achieving this over the last two years is outstanding"

"The beds at Learmonth Gardens were exceedingly eye catching, with a good choice of plants for structure and colour. The Serpentine bed was stunning.” “The group should be commended for the standard of grass they maintain, particularly the edges which set off the planting wonderfully."

"The success of the three sculptures of Dudley, St Michael and the ‘Black Bitch’ must be applauded, from a fund raising and project management perspective. The results are a great asset to Linlithgow, and the group’s determination to see the project through is outstanding."

"It was great to visit the wildflower meadow areas in Rosemount Park … the street trees project will be great to see, once they are planted”. Advice was given on woodland management and the possibility of an ‘Adopt a Begonia’ initiative.

"The Farmily and First Steps project deserve commendation” in relation to encouragement of vegetable growing and giving purpose through growing and caring for produce, respectively."

"The amount of funding raised by the group is spectacular; the continued (financial) support from the community and local businesses for the planters and the hanging baskets is to be commended." 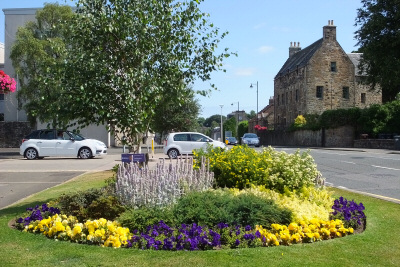 "The popular social media and website is testament to the support from the local community, as is the willingness of local businesses, such as Calnex, to support the group in a more physical fashion by helping plant up the Serpentine Bed."

It was wonderful that the judges had so much appreciated the hard work and support from everyone involved, including our donors and sponsors. And we received over 1,200 ‘likes’ and over 200 favourable comments on Facebook when the awards were announced!

In the run-up to the judging, we were extremely grateful for everyone’s help: both our local Rotary Clubs, youth organisations, local schools, Linlithgow Civic Trust (with their fantastic Carmelite Friary regeneration project), the Linlithgow Union Canal Society, the Community Council, the Town Management Group, the Linlithgow Business Association, the First Steps project, Farmily, the Community Development Project, local churches, and the One Linlithgow BID to name but some.

And of course, finally, we literally could not do without the fantastic financial support of our sponsors. They all have our heartfelt thanks, as do all who support us through our other fundraising activities such as the Plant Sale and, hopefully, our usual Advent Fayre stall with its popular raffle!

The judging of Linlithgow's entry for Beautiful Scotland 2021 took place on August 10th.

You can download and view the Judges Portfolio and its Appendixes:.

Linlithgow won the Town category in Britain in Bloom 2018.