Working with the Linlithgow Town Centre BID and the Linlithgow & Linlithgow Bridge Town Management Group, Linlithgow Burgh Trust, through its newly-formed Public Art Committee, is promoting the installation of two bronze sculptures based on Linlithgow's two traditional civic insignia of the 'Black Bitch' and 'St Michael and the Dragon', as depicted on the town's ancient burgh seal (left and right above) and coats of arms.

Please help us fund this exciting project which will bring together the community of Linlithgow in celebrating the rich historical and cultural heritage of our ancient Royal Burgh!

You can contribute, free of commission, in one of the following ways:

All of these methods allow Gift Aid which adds 25% to the value of your donation.

The Sculptures and the Artists Involved 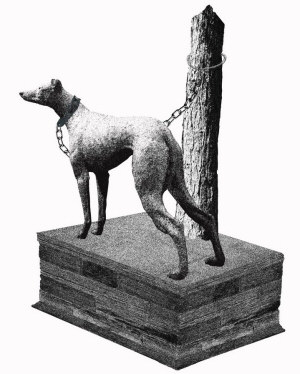 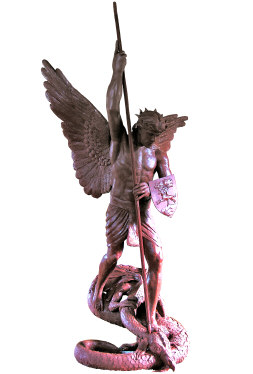 Following a public consultation exercise earlier in the year, more recent feedback, the receipt of planning permission and the success of fund-raising efforts for which Linlithgow Burgh Trust is very grateful, we are proceeding with the Civic Insignia Sculptures Project. David Annand has been commissioned to make the ‘Black Bitch’ and it is hoped that the unveiling will take place in November 2019, preceded by the landscape/paving work due to take place during the week 23-27 September. The design of the sculpture will reflect the outcome of exhaustive public consultation, showing the dog chained up - more in accordance with the ancient seal and coat of arms (above, left).

Subject to the successful conclusion of fund-raising, Alan Herriot will create his vision of St Michael and the Serpent in the early months of 2020. Here, the main change in response to public consultation will be to depict St Michael in a less aggressive pose, as shown above, right.

At the top of the Serpentine Bed, opposite St Peter’s Episcopal Church in the High Street, the 'Black Bitch' sculpture will form the centrepiece of a new seating area with three bench seats, two litter bins and an interpretation board explaining the historical background and providing information about the sculptor concerned. In accordance with the results of the public consultation and the clear preferences of the project’s major funders, the ‘St Michael’ sculpture will be located at Low Port, but sited as the centrepiece of a flowerbed rather than being surrounded by paving. Nearby will be another interpretation board.

Involvement of Young People in the Project

As part of the public engagement process, we asked Primary 5-7 pupils, from all five mainstream primary schools in Linlithgow, to undertake some of their own research and produce drawings and paintings to show their own ideas of how they would like the female hunting dog and 'St Michael and the Serpent/Dragon' to appear in sculptural form. The results were exhibited at the Low Port Centre on Wednesday 29 May, from 2.30pm until 7.30pm, with prizes awarded to the entries which most impressed the judges. Some of the children’s work will be featured on the proposed interpretation boards near the sculptures and, to a greater extent, in a new booklet on the overall project which will be published for general public distribution.

Although local historians agree that the female greyhound most likely represents a hunting dog temporarily tied to a tree trunk to conserve its energies, legends abound about its origins, most popularly that it depicts a faithful hound which fed its master who was chained to a tree on an island in Linlithgow Loch (and which, when discovered, led to the dog being similarly chained up).  St Michael, the patron saint of Linlithgow, derives from the Bible in which, as the archangel or 'chief angel', St Michael's slaying of the dragon (or serpent) symbolises the conquest of good over all things sinful and evil. More specifically, as the town's 'guardian angel', he represents a force for good, keeping the town’s inhabitants safe from evil, harm or danger.

Both the dog and St Michael appeared on Linlithgow's burgh seals as long ago as 1296 and 1357.  In those days, it was customary for burghs to have a double-sided seal, one side normally carrying a secular object and the other a religious object, usually referring to the town’s patron saint - and this was the case in Linlithgow until the town's official Royal Burgh status was abolished in 1975. 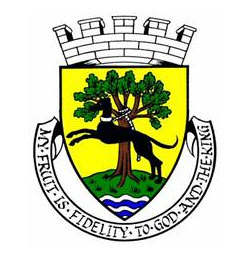 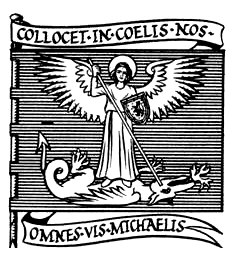 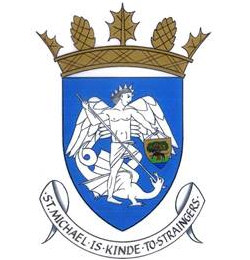 Left: The coat of arms most often used by Linlithgow Town Council.
Middle: The St Michael insignia and motto depicted as they might have been shown on a sacred flag.
Right: The new coat of arms of Linlithgow & Linlithgow Bridge Community Council (used by permission).